I have now written about two intepretating languages in the Amiga echosystem, Amiga Basic and Arexx. It is time for write about compiling languages, because if you're writing LOB applications or even games, you would want to compile the code down to machine code, or in some cases write the assembler directly.

Our first program in Amiga E will be a very simple one. I will once again use the memacs editor to write my programs. 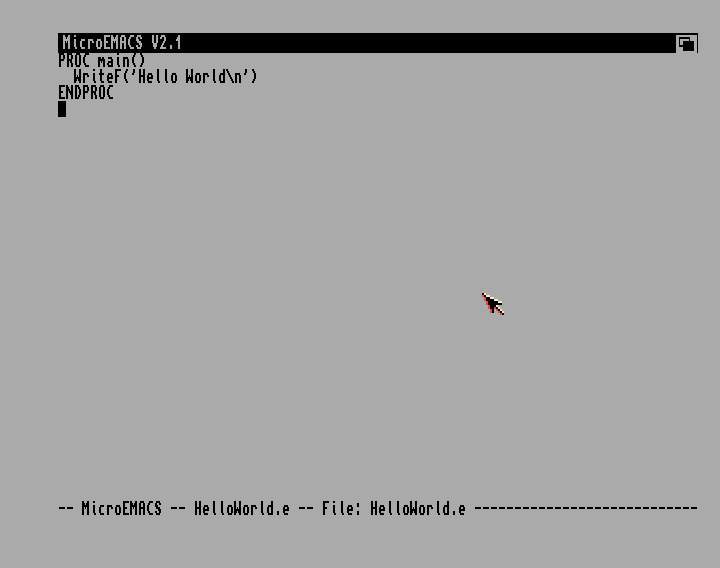 The Amiga E language is supposed to be inspired by C and C++, but this seems more like Pascal to me.

We compile the program from CLI to get a runnable binary.

I always find it interesting to see the size of a program after compilation. How many instructions my code turned into. This simple example turned into a binary of 672 bytes. I assume there is some padding in there, and the program would be smaller if I wrote it in M68000 assembler, but it is at least <1kb which is totally acceptable. 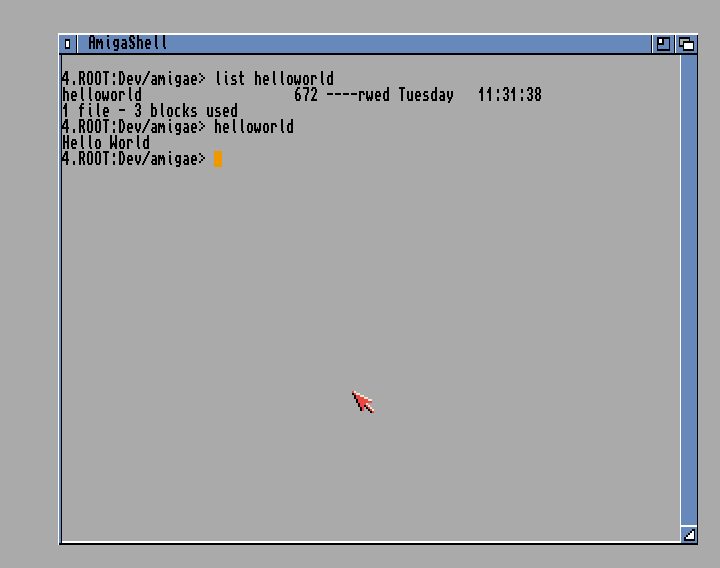 Variables in Amiga E are losely typed, but as with Amiga Basic you need to define them before using them.

I sense several influences in this code. 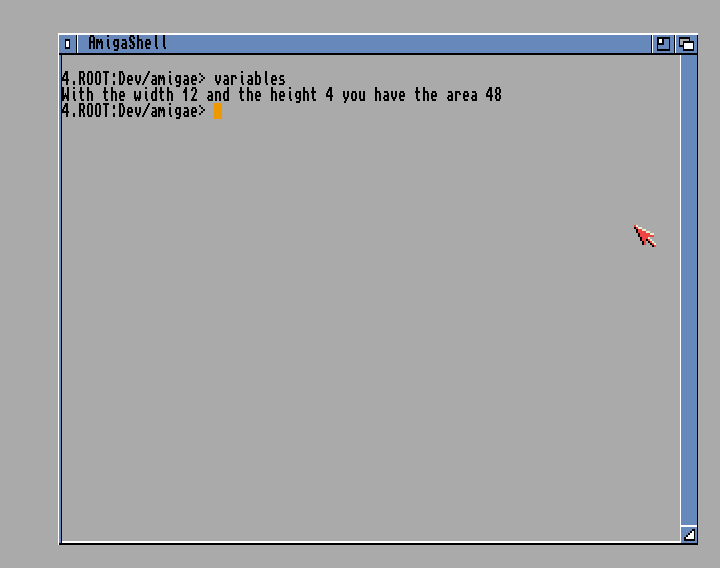 Dealing with floating point numbers in Amiga E is a bit tricky as the language doesn't really have it as a type, but using LONG to store floats. This means that when you're handling floats you are handling longs, meaning you need to specify every time you need a float operation instead of a long operation. This is done by a special casting technique with the ! operator.

If you prepend your field with the ! operator it will convert the long value to a float. If you postpend the field you will convert to an integer. Here is an example on how to calculate the area of a circle in Amiga E.

There is some really crazy things going on in this code.

As strangely as this might look, it actually works. 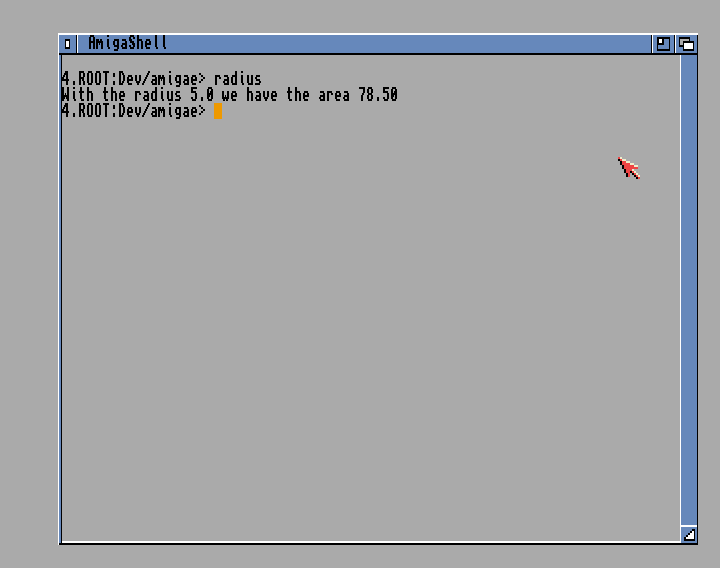 Getting input from the user on the command line is pretty straight forward in Amiga E. 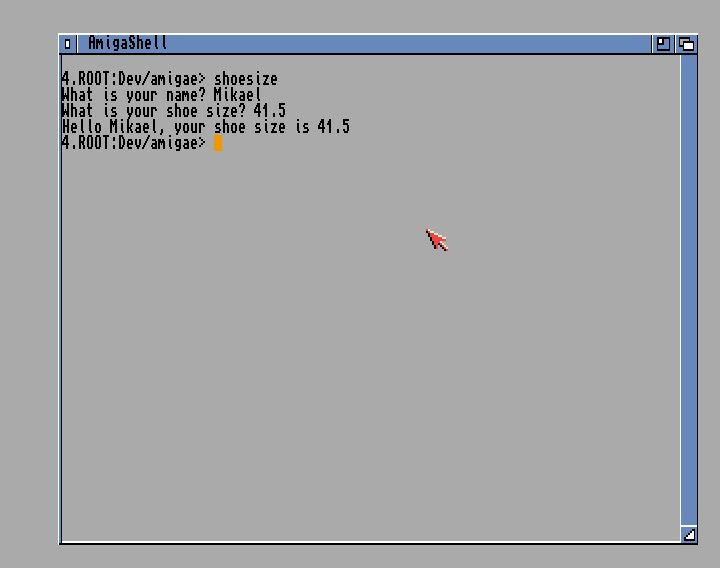 It is time to start looping in Amiga E. Here is a small game where you should guess what number the computer is thinking of.

This code is pretty straight forward. 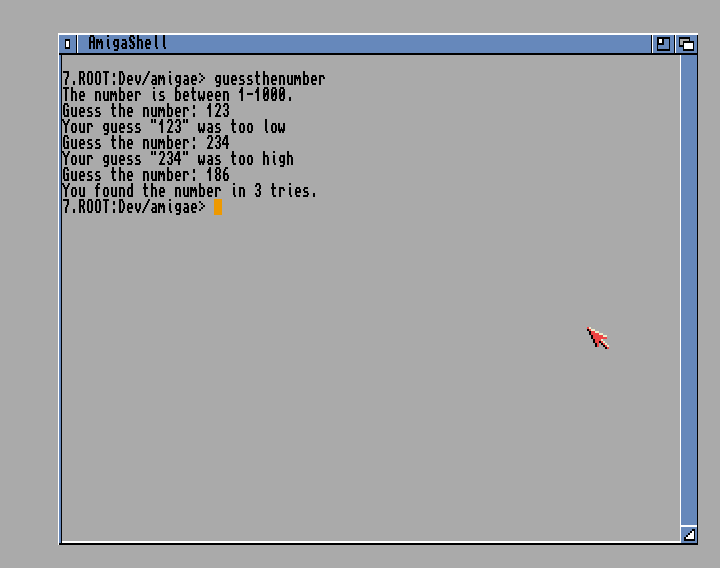 For-loops in Amiga E is pretty similiar to Pascal where you need to define an identifier for the iterator and you can loop to an expression that is calculated once.

Here is an example that will type out a pyramid of stars to the screen.

This algorithm is very inefficient as we're writing every character one by one, but it shows very well how For-loops works in Amiga E. 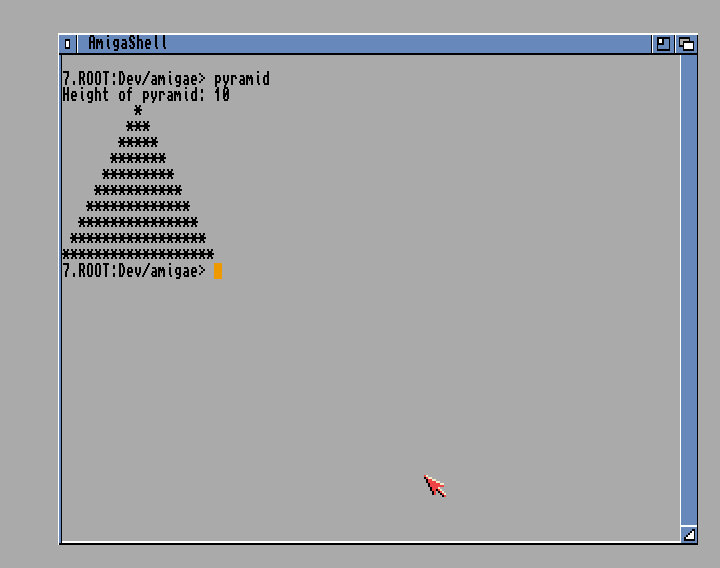 We can also specify how the iterator should be incremented, and this allow us to count down. 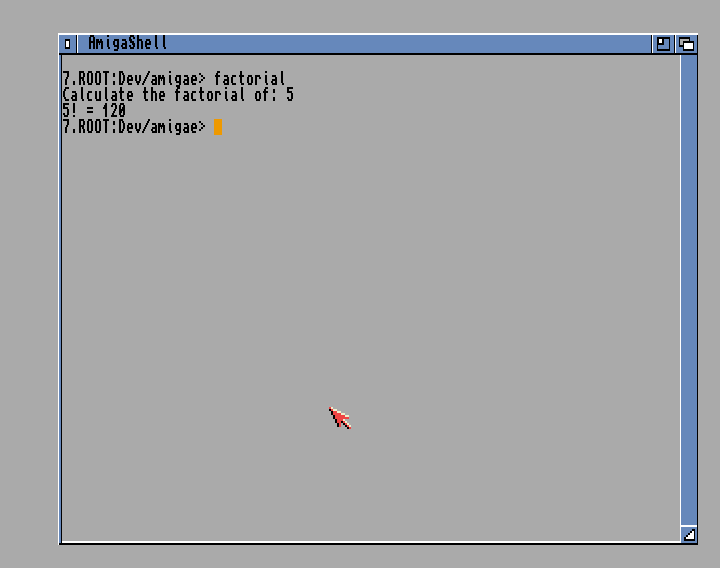 When IF-ELSEIF-ELSE statements become too complicated, Amiga E has a structure called SELECT-CASE that you can use to tidy things up. This is like most CASE-statements in other languages, but a bit more powerful.

We can use this to build a menu.

Here we create a selection between 0-6 and we select a case depending on input. Input could be any kind of expression that is evaluated when the program comes to that point. The default clause is run if there is no matching case. 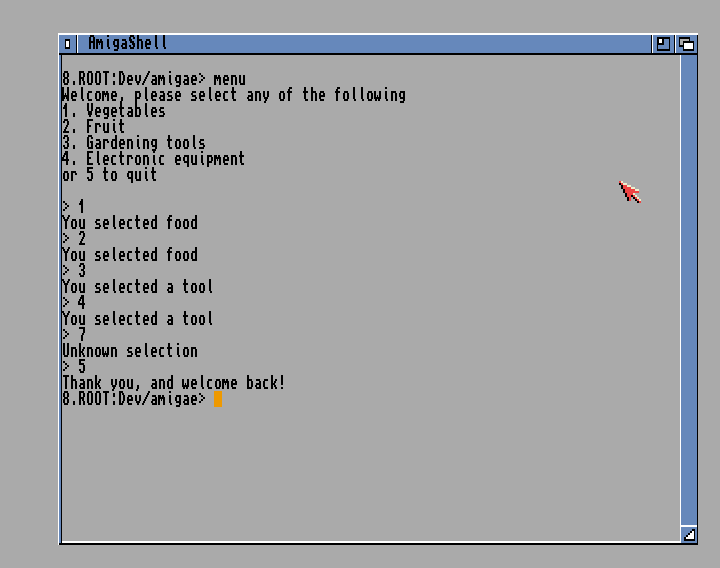 On a more technical standpoint, a STRING is an array of chars, where an e-string is a linked list of chars. All API functions that accept STRING will also accept e-string but not the other way around.

You can index into a string in Amiga E just as with most other languages and both set and get individual chars. 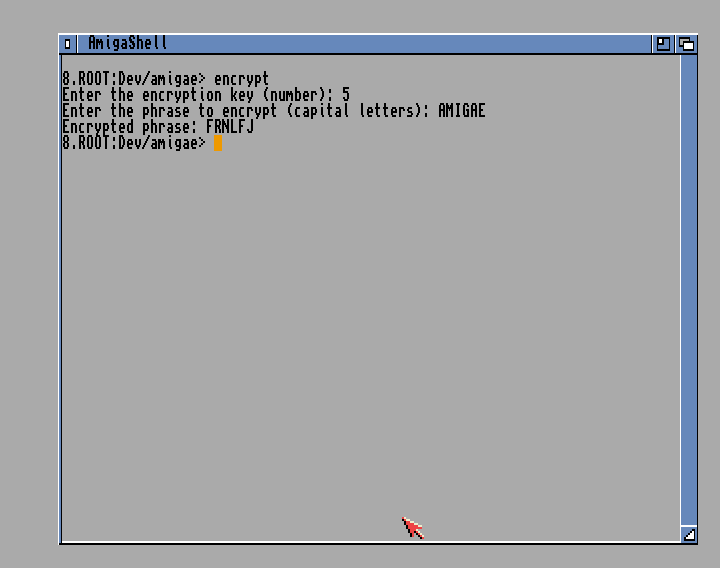 Arrays are a common type in most programming languages. We have been using arrays in the form of STRING which is an array of CHARS.

Here we will use an array to calculate the fibonacci sequence.

If we like here define an array without specifying the type, it will default to char. The index of the array is zero-based and we can index into the array as in most programming languages.

We can also define an ARRAY OF INT or ARRAY OF OBJ if we want an array of custom objects. 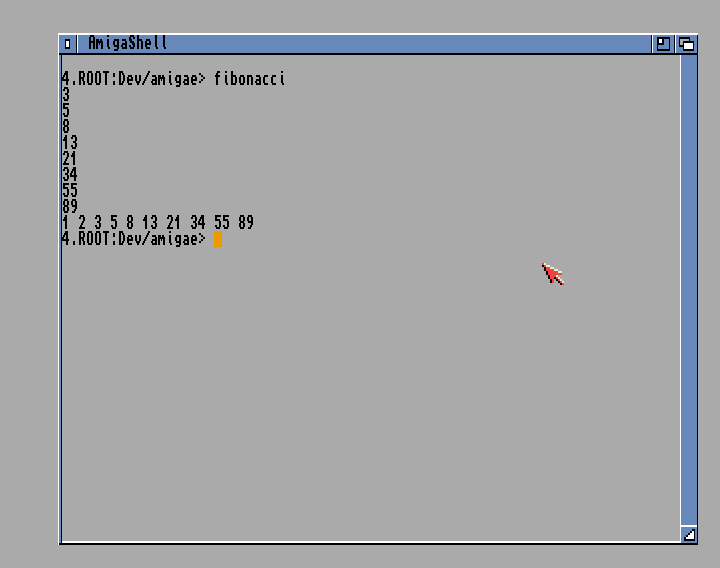 Our program execution always start at the main() procedure. We can add other procedures to our program and execute those.

You write procedures just as you write the main procedure. One noteable thing is that the procedure that you're calling doesn't have to before or after the callee. The order of the procedures doesn't matter. 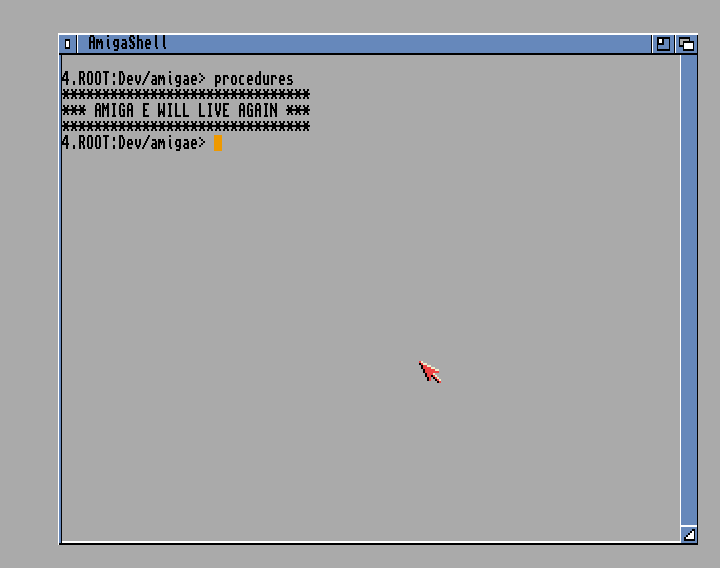 Let's try another example with procedures. You can define variables outside procedures to make them global, and you can send values to procedures as arguments.

There is not much happening here apart from sending values to the swap procedure and using numbers variable as a global array. This is starting to look like a real program and not just some sample code. 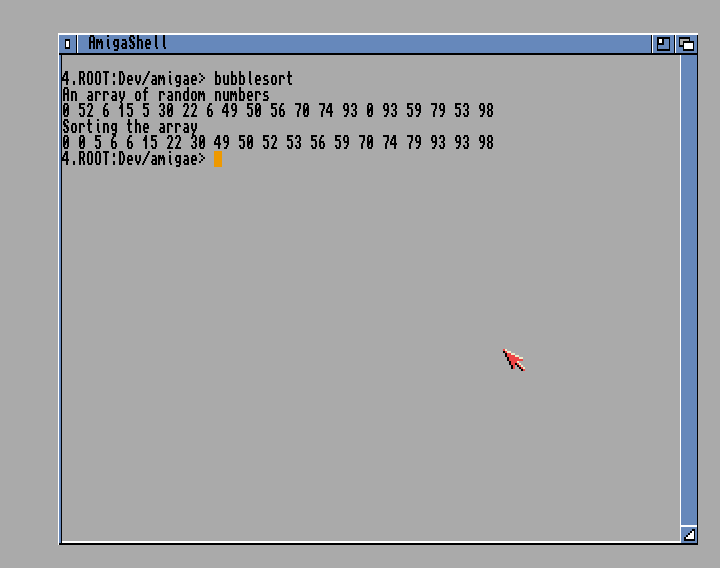 The only difference between a procedure and a function in Amiga E is that functions return values. Actually functions in Amiga E can return up to three values. Only the first value will be handled in expressions. In assignment you can get all the values.

The main feature of functions is of course recursion, here demonstrated in a binary search algorithm.

Here I write a function create() that is responsible for creating a list of numbers. A list in Amiga E is not much different from an array, other than it is initialized in runtime so the size can be dynamic. This is called an e-list and works exactly the same way as an e-string.

The ENDPROC takes the argument of what is returned from the function. This way we might write a recursive function. 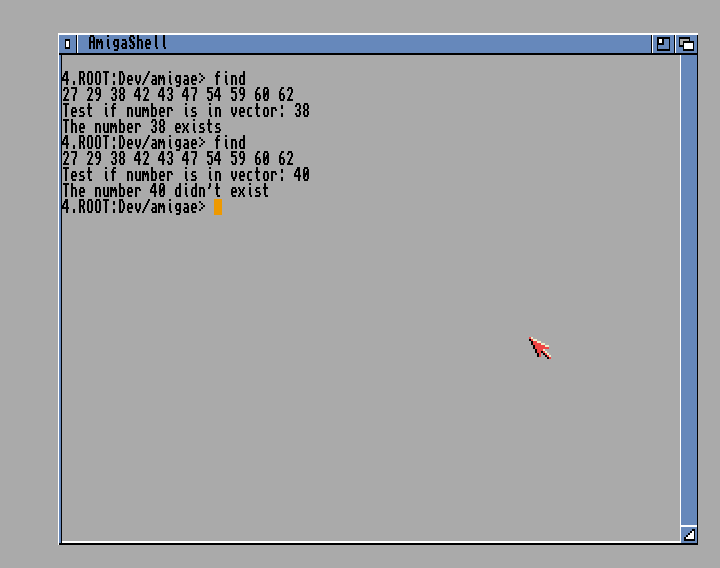 I have been going through the basics of Amiga E, and there are a few aspects that I haven't even touched. I have not showed you Enumerations, Sets, Object Oriented Programming or Linked Lists. There are more cool things like Unification, Quoted Expression and writing Assembly Statements directly in Amiga E source.

You can write your own modules and use the built in Amiga System Modules to create user interfaces.

I was surprised by Amiga E. It was not really what I expected it to be. It is a very close relative to Pascal, but where Pascal is a complete abstraction of what lies underneath I feel that Amiga E is more like syntactic sugar than a complete abstraction. The assembly layer is leaking through in stuff like, everything is a LONG variable, and indexing a list is depending on what size of the type inside the list.

For a language created by one person, it is still great and I think a much needed improvement over C/C++. The compiler is sometimes a bit quirky but that is expected. I think Amiga E is an awesome language and it could be called a modern programming language even though it is officially dead.

I used the following resource for writing this guide. Please go there for more information.