I suddenly found this urge to dig up my old Amiga and play around with it. I called up my parents and went over to their house. What I assumed was an Amiga and a screen, was boxes upon boxes of floppys, cords and other junk. What I also found in there was three books on Amiga Basic programming which inspired me to write this blog post1. 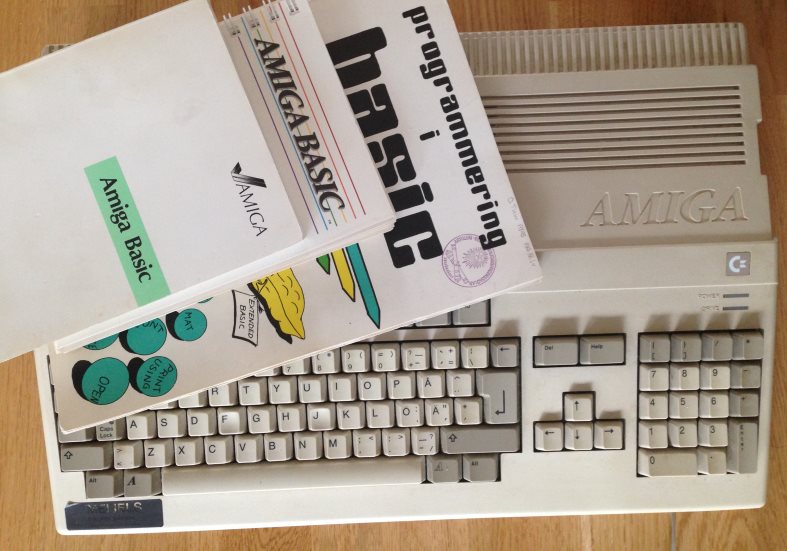 Amiga Basic was shipped with the operating system Workbench version 1.1-1.32. When Amiga OS 2.0 was released in 1990 Amiga Basic became obsolete. It had a bug preventing it from working properly on 32-bit CPU and was instead replaced with Arexx. If you want to run Amiga Basic programs on Amiga OS 2.0 or better you need to use another intepreter or compiler.

One of the most interesting things about the original Amiga Basic intepreter is that Microsoft created it, so I think this is was my first interaction with the Redmond Giant. 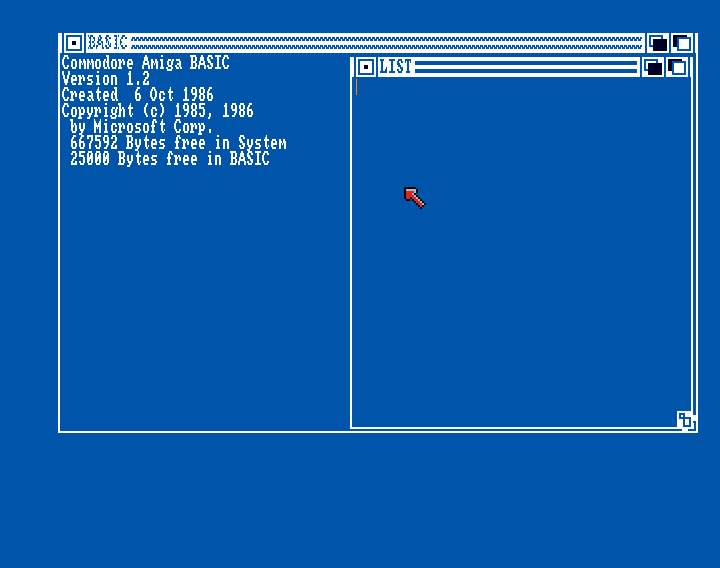 The Amiga Basic came with a couple of high end features

I've also heard it rumored that you could inline assembler, and call assembler code directly, but this functionality was so buggy that it in the end was useless.

We are now going to dive into code written for a language that has not been working with any hardware or operating system released last 25 years. However, you can still get a copy of Workbench 1.2 with the Extras disk from Amiga Forever, and with an emulator try out this fascinating programming language from Microsoft.

This is Hello World in Amiga Basic.

Clear the result window, print the text and end the program. 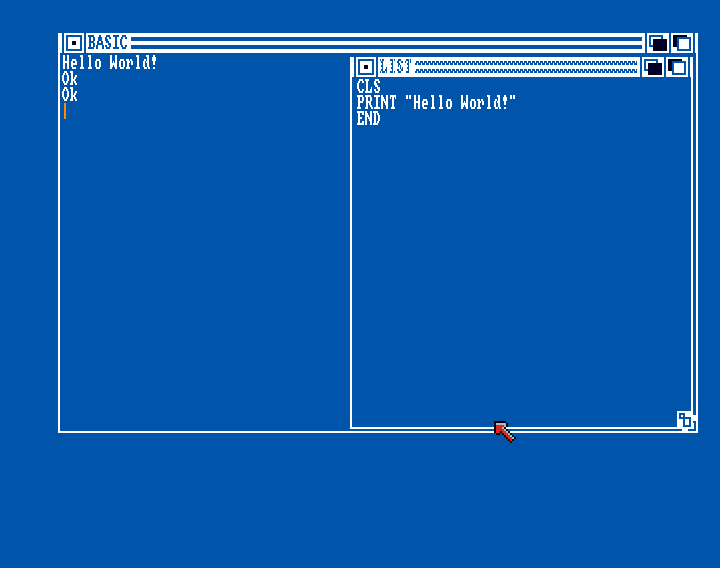 Ok Ok. Every time I save or bring up the LIST window the intepreter tells me "Ok".

In Amiga Basic you have floating point numbers, integers and strings.

It is the declaration of the variable that decides what type it has. Float is the default type. You add a % suffix if you want an integer or a $ suffix for a string.

This program will calculate the area of a rectangle.

Here I specify explicitly that I want integers, even though it would have worked just as fine with the default value type, float. 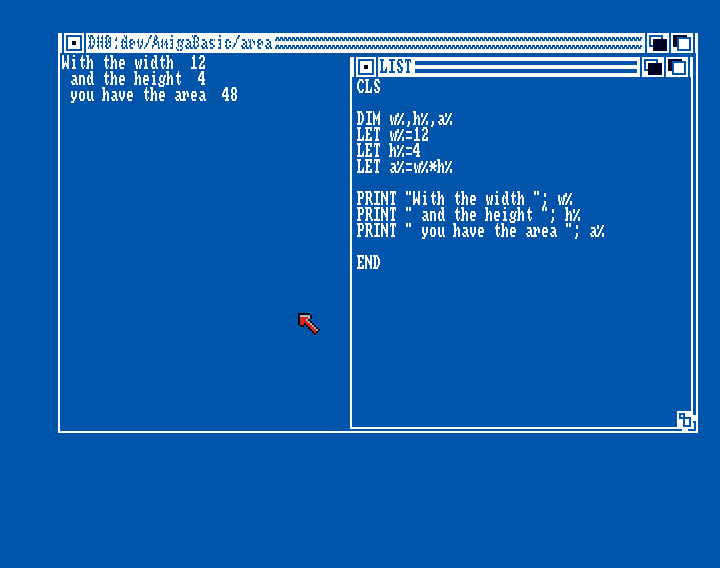 PRINT is a confusing command as it outputs spaces around identifiers. This makes output formatting very hard sometimes.

You can also have constants in your program and read them in as data. This is done with the commands DATA and READ.

If you don't add enough of ## in the print using, you're going to get some nasty % characters by the intepreter. 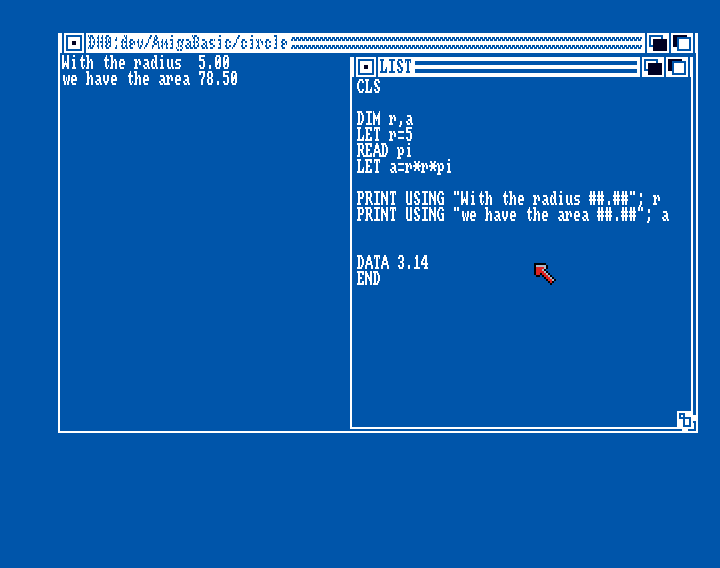 In the LIST window I have two newlines before DATA. This is because the editor has a bug where you sometimes can't remove lines. It complains about the empty lines being too long.

You use the keyword INPUT to read input from the user. This program will ask for you shoe size and print it back to you.

This is actually the first program that I ever typed into the intepreter from a computer magazine called DatorMagazin3. The article was showing the same program in several different programming languages. 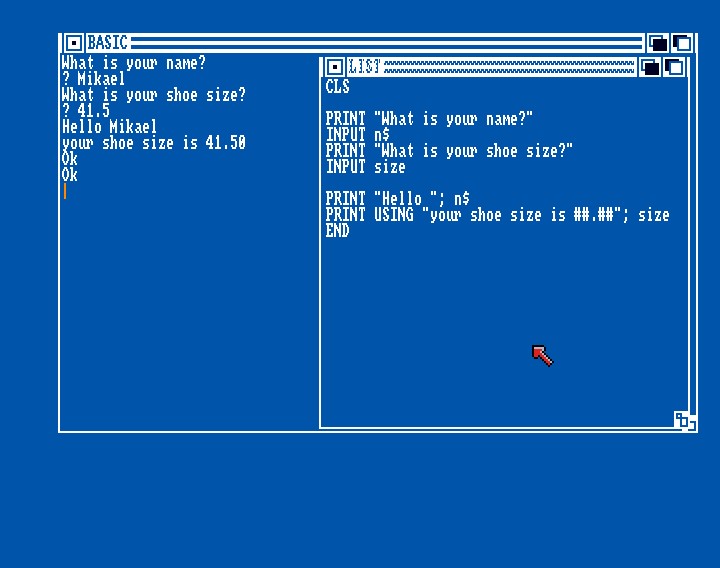 The INPUT command puts a questionmark before the user input and there is no way to modify this behavior.

The amazing thing about Amiga Basic is that IF works with blocks. In older Basic dialects you only had the option to control flow by sending program execution to a specific label.

I remember this being a learning exercise from the book "Turbovägen till Pascal" when I was learning Pascal.

RND will actually give us the same random sequence every time, so this game is not very fun after you've found out the number is always 122. 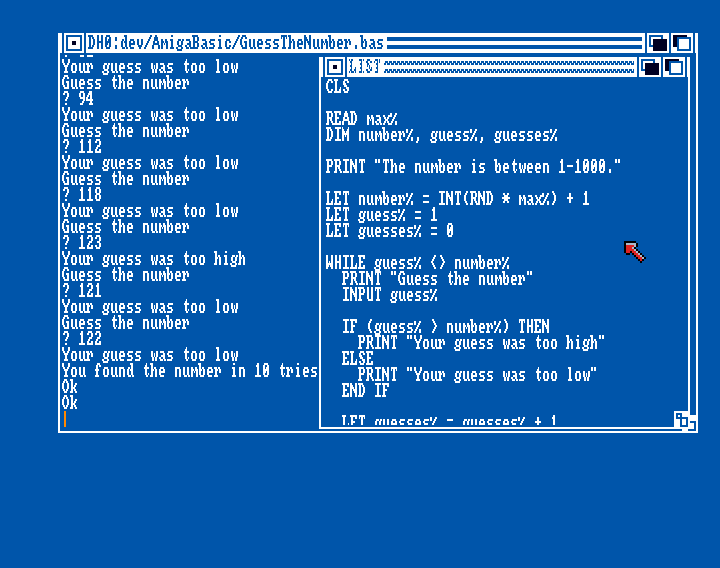 There is a bug in this code causing it to say our guess is too low, even when it is spot on. Can you propose a fix to that bug?

A foor loop starts at a number and counts up until it reaches max. This program will type out a pyramid of the height that you specify.

PRINT "Enter the height of the pyramid" INPUT height

PRINT SPC(height - i) stars$ NEXT i END 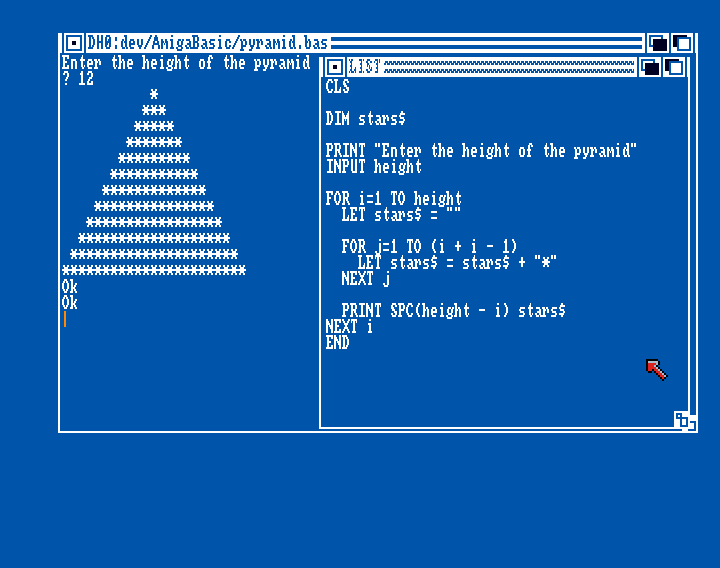 And we can also count down with the FOR loop. Here we use it to calculate the factorial of a number. 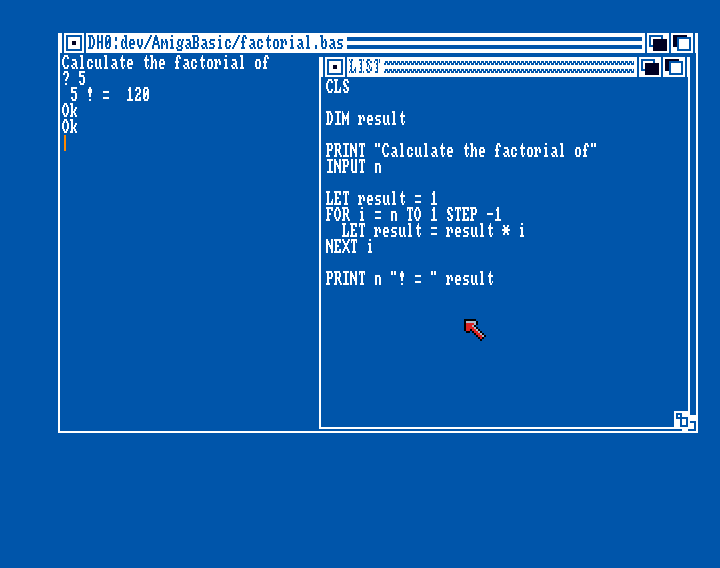 Lucky we picked a small number. Who knows what will happen if the result variable overflows.

You define a string value by naming the identifier with a dollar sign $ in the end. There are some string functions built in to perform basic string operations.

This program will take a number as encryption key, and a string, and with ceasar cifer encrypt the string.

I write my own encryption algorithm and I am proud of it. 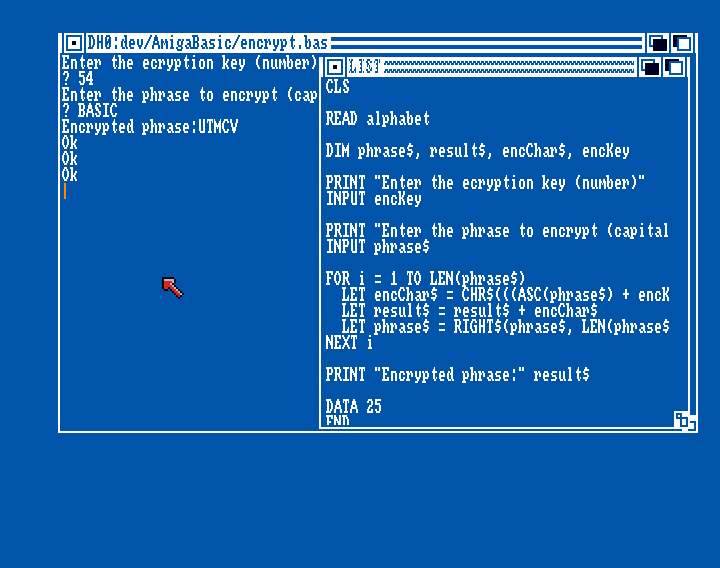 Amiga Basic has no support at all for arrays, but you have direct access to the memory where you can read and write values as you please.

This program will calculate first 10 numbers from Fibonacci and output them to the screen. 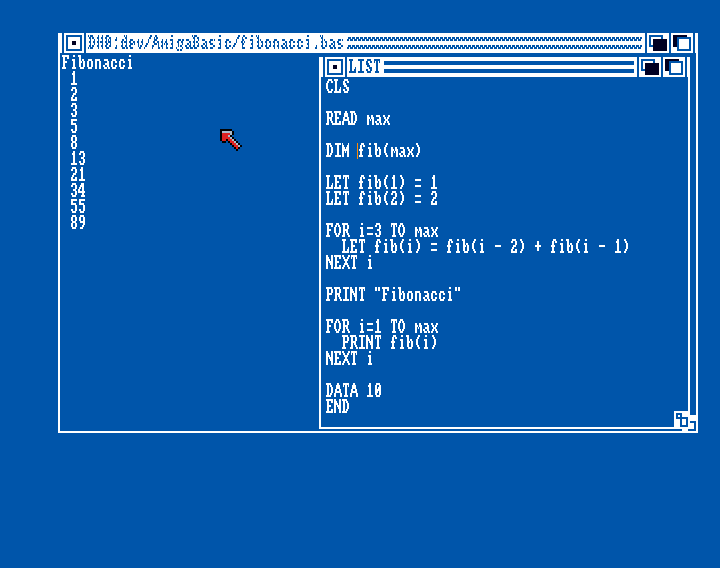 It is not arrays per se, but it will work well enough.

Amiga Basic has this feature where you can split your program into sub programs. These sub programs have their own scopes meaning they do not share variables as labels do. This makes it easier to maintain. 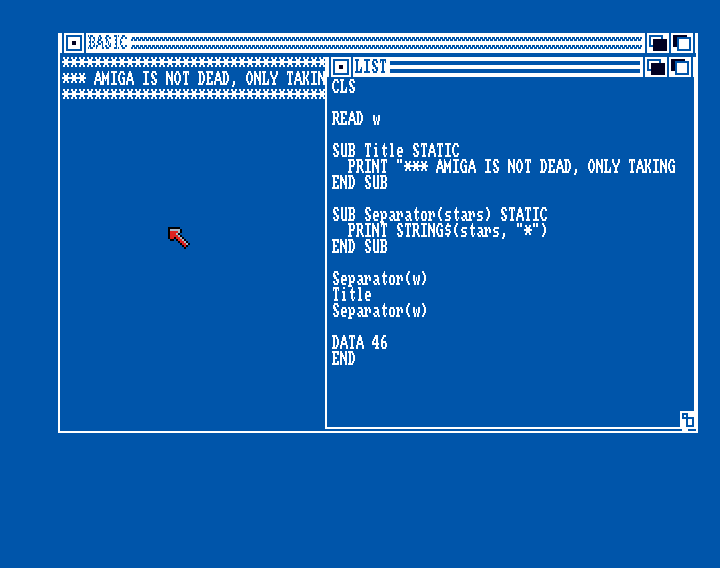 The SUB is not really a procedure in the traditional sense, but more seen as a sub program that you can send arguments to.

Here is another example performing a bubble sort 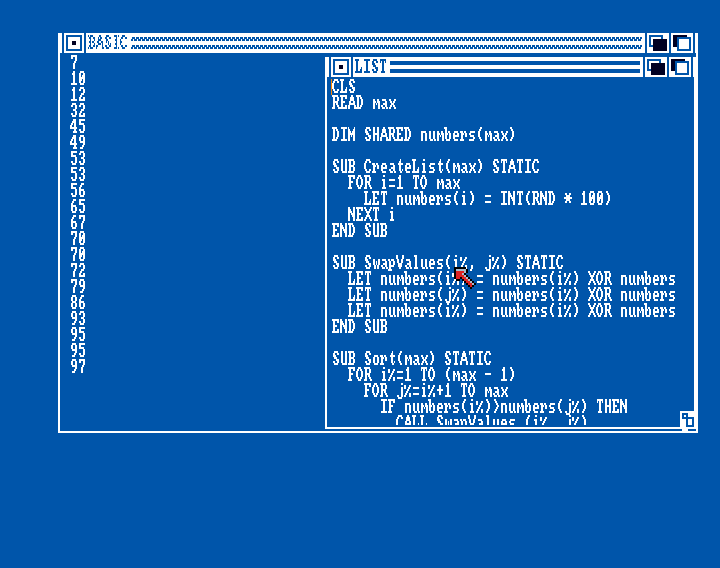 Since my first programming language was Pascal, I have never been a fan of Basic. When I was young I had a friend that did a lot of programming in QBasic (DOS) but I could never really get the hang of it. I simply liked Pascal better.

As a forensic excersise I find Amiga Basic to be quite fun to play around with. That is very much because it is an official Microsoft Basic implementation, and I don't think I've been this close to early Microsoft software before. That would be MS-DOS 6.0.

Microsoft Amiga Basic is missing some crucial parts that I need in a modern programming language.

Of course there are still operations in the API that I haven't covered here, but I think this guide goes through the bulk of what you can do with the language. If you have any questions please ask them here and I will see if I can dig out an answer from the reference material.