Dealing with dependencies in functional programming

What is a dependency?

In OO programming you will use a dependency injection framework to build dependency chains. You use it to inject dependencies into constructors, methods and parameters. That is all very cool and enables testability, but not very useful in functional programming.

Why do we need to think about dependencies in functional programming?

The most obvious way to handle dependencies is to send them into the function as an argument.

The dependency is a function that knows how to get a person from the database by calling with its name. While unit testing we really want to get rid of that dependency and that is why we send it in as a function, instead of calling it directly from where we need its result.

Testing would look like this. Here I'm using xUnit and Unquote for testing.

Unit testing with Xunit and Unquote is a blast. I love the expressiveness that Unquote gives us. If we where to run this with Resharper as testrunner, and fail the test - we get this great test failure. 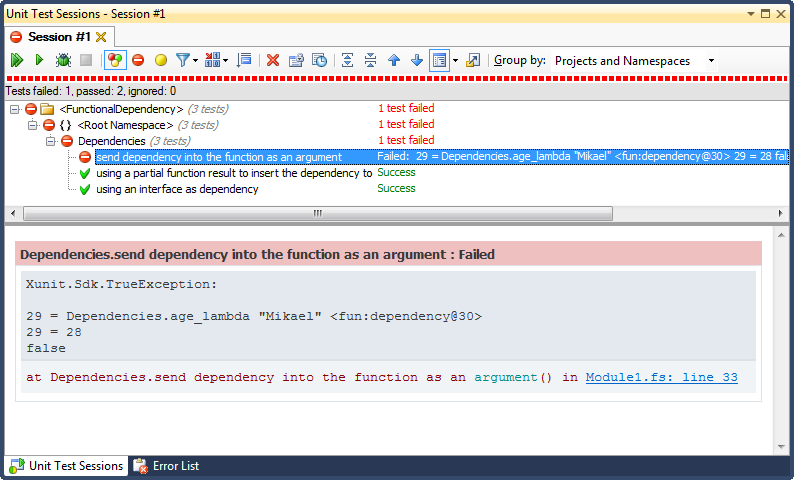 This is a very scary title, but another functional way to deal with dependencies. Instead of accepting the dependency as an argument, you return a function that have to be completed with the dependency to run.

This is indeed a bit harder to read and makes the function signature a bit messy. I return a function that will accept the dependency as an argument. Anyway I do like this method better than the previous.

And here's a test.

Since F# has object literals, it is very easy to stub out interfaces, and when talking to OO libraries you might have to resort to this method. Consider our dependency.

We would like to write an authenticate method in F#. How should we handle our dependency? Here's some F# equivalient of what we would do in OOP.

When calling this from a test, we can use object literals to change the implementation of the interface members.

But a more functional approach would be, not to use the interface as a dependency, but focus on the actual function as we did on the first two patterns. Let the caller of this function worry about on what object instance the dependent function lives.