F# has this clever functionality called Option<'a>. This means that, instead of returning null from a function, you return an option. This option could have the value Some x or None, where x is the value you want to return, clearly indicating that this method could return a value or not.

And for those of you not fluent in F#, this means that getIndexOfSubstring takes two strings and returns an option of int. This option could be Some int, or it could be None if the substring is not found. What you win, is that option is now part of the method signature. As a method invoker you will have to handle the None option. As with NULL references, a null return value is often a side effect of the method and often unexpected.

The option type is a type that we use as return value from a method.

What does this mean?

The method signature also provides you with better test names.

What are Some and None?

The example code makes much more sense if you look at the class diagram of Some/None. 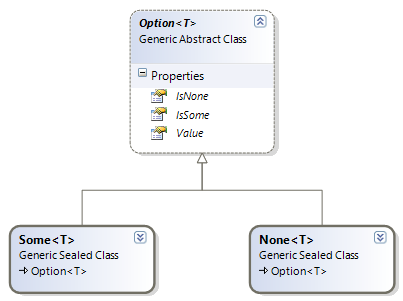 The code for the option is very abstract.

We could implement IsSome/IsNone by comparing this type with Some/None class, but I don't like the idea of a superclass reference any subclass. The implementation of Some and None are pretty straight forward.

Creating a Some instance with null value is only ridiculous, and that is why we throw an exeption. The same goes for calling Value on None.

How do you call a method that returns Optioni<T>?

Here is some code that will call my first example and act differently if the result is Some or None.

What are the benefits of the calling method?

Value types like int already have this functionality with Nullable

The real danger of null in .NET is when it comes from the framework or a third part library and we where not expecting it. That is when you'll see the NullReferenceException, the most - and it could pop up at any time in production. This is why we don't allow null values into Some. Better to fail early when we're creating the result set of the method, than letting the program run in a faulted state until it tries to use that value.

What has to be noticed in this example, is that found really have to be checked for null before entered into Some, or it may blow up. This means that Some/None null checks would be all over the place violating DRY. Could we fix it with an extension method?

And this changes the previous example to.

When is it elegible to return Some<T> instead of Option<T>?

When we have a reference return type that we want to communicate, "could never be null", we could use Some as the return type, but this would feel a bit weird at the method invokers end. You could communicate the same thing with Microsoft Code Contracts.

Here's really three possible state of Option<T>, Some/None and Null. How do I protect myself from a method with Option<T> return type, from returning null?

Microsoft Code Contracts is also the answer here, or you could look into AOP and write an aspect that will throw an exception when you try to return null instead of an instance of Option