Create your own custom NUnit build activity for Team Build 2010

There was an awkward moment when I realized that TFS 2010 does not support proj build files anymore. Now you're supposed to use Workflow Foundation for managing Team Build. Sadly, we have a quite big and complex build setup that we had to convert. Setting up such a build is not easy, and writing your own custom build activities (previously known as build tasks) is not trivial. That's why I would like to guide you through how it's done.

Creating the build definition works much the same as it did with TFS2008. Right click on Build in Team Explorer and select "New Build Definition". For this tutorial I will create a new Contiuous Integration build. The interesting part about this dialog is the "Process" screen. Here you can specify input arguments to your build process, which is very useful. Make sure that you create a copy of the Default Template to build your custom build upon. 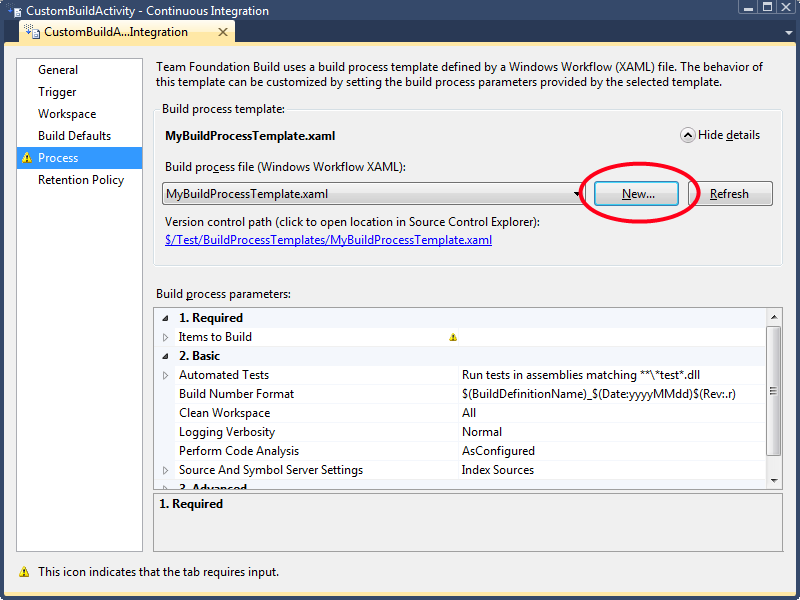 You can now edit your build activity by just double clicking the xaml file in the source control explorer. Neat! 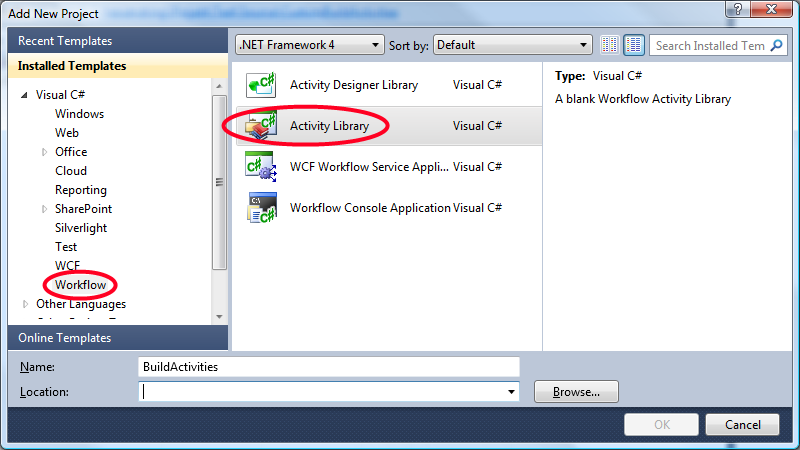 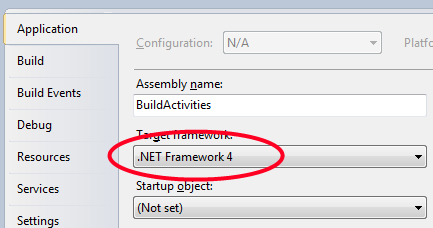 I want to build an NUnit test runner activity, so I will name my first activity NUnit. Right click on your project and Add a New Item. In the Add New Item dialog select Activity. 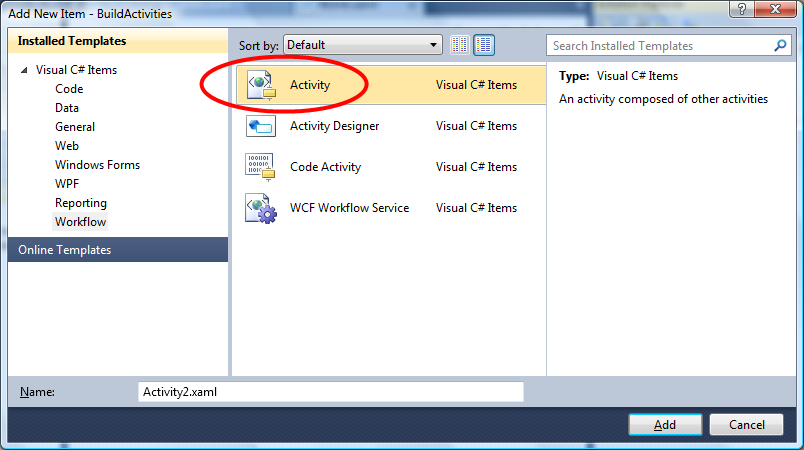 You should prioritize Activities before Code Activities for Team Build as it will have an easier time to stop a build with xaml Activities. In the Toolbox you will find several standard Activites that comes with .NET. Add the Team Build activites by right clicking on the Toolbox and select "Choose Items". Under System Activities Components you can browse for Microsoft.TeamFoundation.Build.Workflow and add those Activities to the Toolbox. 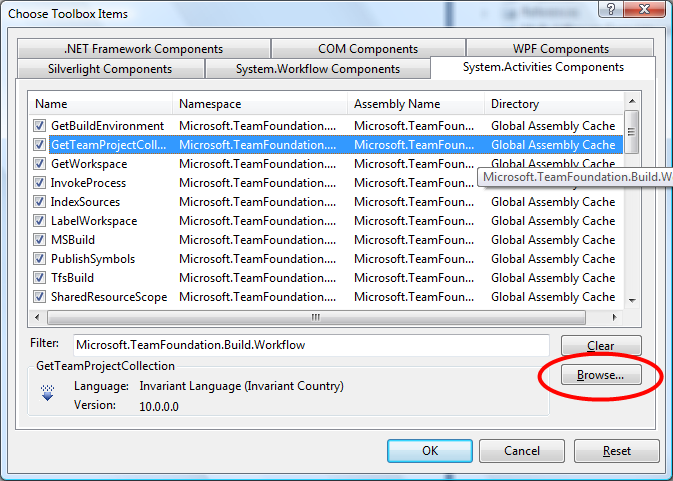 Once in Toolbox, drag the InvokeProcessActivity onto the workflow. 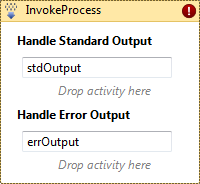 A few things to note

So we need to specify arguments for this custom build activity. 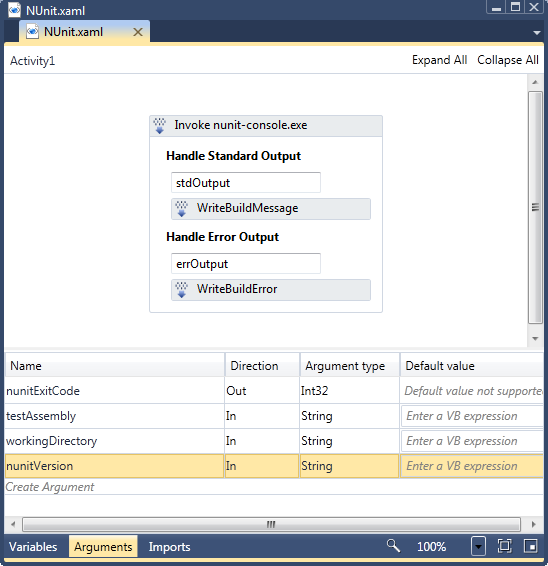 Also notice that I've added "WriteBuildMessage" and "WriteBuildError" to the Invoke activity. This will log everything that NUnit write to the build log. Handy when you need to follow up on errors.

Add the custom activity to your build

Before we add the custom activity to your build we need to create a partial code behind file. Don't ask me why, but Team Build will not accept your activity without it. Go ahead and create a new class that looks like this.

This will enable Team Build to load your custom activity as a build activity. Compile your project and open up your team build process. 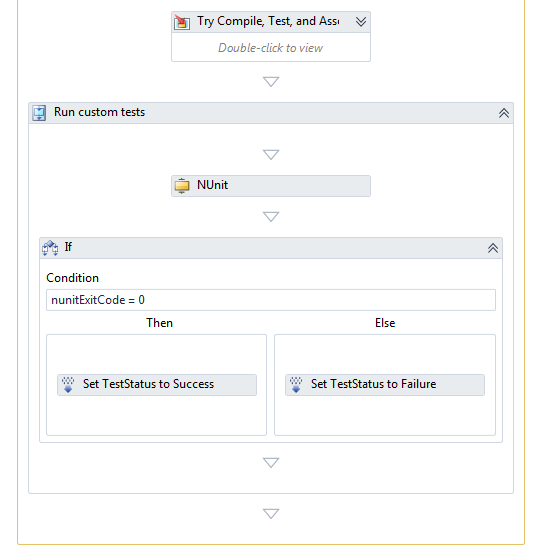 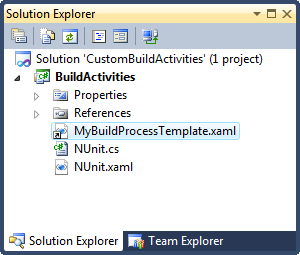 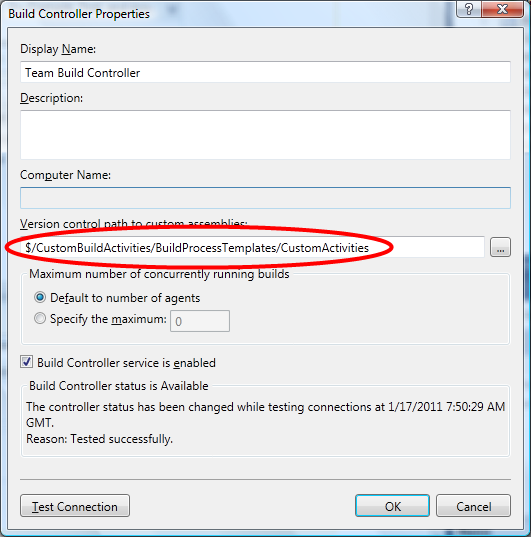 Copy your assembly to that directory and check it into source control. Congratulations! You have created your first Team Build Activity. Let it not be your last!

I would like to share a link to Ewald Hofman's excellent guide to Team Build 2010 as it has helped me a lot in my struggles. His tip about using executing powershell scripts from Team Build is very useful. http://www.ewaldhofman.nl/post/2010/04/20/Customize-Team-Build-2010-e28093-Part-1-Introduction.aspx