This post will describe how tests are setup within Kino. If you haven’t already you can download the source from here, play around and tell me what you think.

I've chosen MsTest for Kino, simply because I have to learn its weaknesses before a project I will have later this year demanding MsTest as testing framework, simply because we're going TFS all the way.

One very important aspect as in all programming is to find a great structure and stick to it. I've worked out a technique for writing unit tests that I'm especially comfortable with, and I would like to show it to you. [actor] should [condition] Writing unit tests, you're testing the inner most parts of the program. It is very seldom that you test a whole class, but you go down into methods and test specific cases. I've found that using the above statement helps me to find out what to test. The actor is most often a method or a property. It could also be a class, but that is quite unusual. Please examine the following statements.

The only way I'm able to do this is to recreate the namespace structure in my testing assembly, and actually set SUT classes as namespaces, and their methods/properties as classes. Please study the following screenshot from Visual Studio object browser. 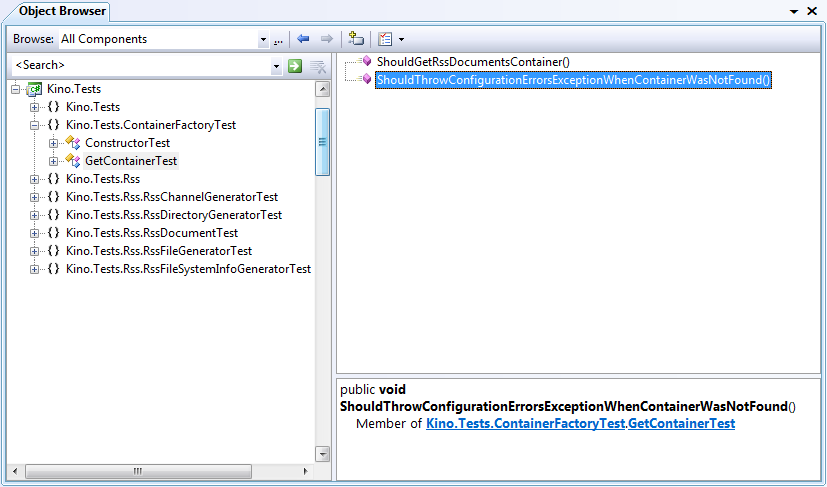 The above picture could be read as

This kind of thinking is called behavior testing, because we're testing the behavior of these methods and classes. It gives our tests a much better focus and they will become easier to read and to maintain. It even gives us better coverage, something I will talk about in my next article.