I've set up the Visual Studio solution and started to write some of the Virtual Path Provider code. It is now, at the beginning of the project all the important decisions are made. "Should I unittest?", "Are there any need for continuous integration?", "Do I have to use Subversion when I'm the only programmer?" I will get back to those questions regarding tools in a later post. Right now I will focus on the solution. 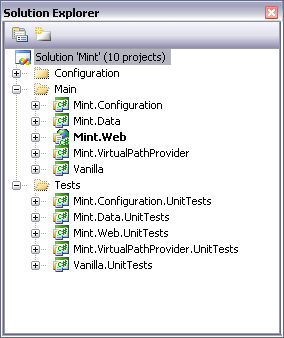 First up is a solution directory called Configuration. This will contain configuration files for all the different environments, development, test and later on production. Right now it only has the configuration for development and this is added as link from the other projects and copied on compilation. I like having configurations in a separate folder. It gives me better control over the differences between environments. Main solution directory contains the source code and Test contains the same assemblies as Main, but with an added UnitTests at the end. Mixing unit test projects and the main source code always gives me headaches, and that is why i prefer this setup. I don't like having too many solution directories, because it hides stuff away from you (as with regions in code), but in this case I do find it easier to look at the main source or the test code. I'm not the kind of guy who writes his tests first. I've tried it but it doesn't suit my style of programming. I like to sit with a blank piece of paper and think through the solution, writing code. The testing is just a way to do excessive refactoring and finding the bugs that you missed out when you first wrote the code. It works well for me, and most of my code come out defect free in the end.